A broken toe and a fire

A broken toe and a fire

Rather humorously and almost disastrously, two incidents occurred within about 2 minutes of each other yesterday afternoon; a broken toe and a kitchen fire.  Luckily my friend had been chanting the Gayatri mantra and no harm came from the fire, which was quite miraculous in itself.  The irony of my forecast of “fires and explosions” for the month of June certainly wasn’t lost on me, so I decided to cast a chart for the moment and noticed some finer astrological principles at work that I felt could benefit any astrologers reading this blog.  Here is the chart for the moment: 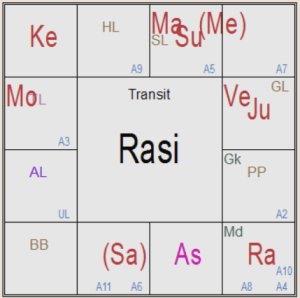 The native is a Libra ascendant and it is important to note that the lagna at the time of the incidents was also in Libra, activating her chart from the perspective of physical body (1st house).  This re-emphasized the Mars-Sun combustion in the 8th house in trines to Rahu which became the ignition of the fire. The Moon was transiting the malefic sign of Aquarius which is ruled by Rahu and was square to the degree with Mars, thus activating the incident of the fire in her chart.  Luckily the fire was put out before the rest of the kitchen could catch.  Venus and Jupiter both aspect the combustion from the sign of Cancer.  While Jupiter protects, Venus is ruled by Lakshmi who saves from fires, and as it is posited in Cancer likewise it was a Cancer ascendant who put out the fire.

Of more interest to me than the fire is the broken toe.  Parashara gives a rather unused technique in his Brihat Parashara Hora Shastra of attributing a body part to each drekkana of the 12 houses and in this way predicting possible injuries to the body as well as denoting specific marks of the body based on planetary positions.  It seems that there are a number of ways of applying this technique but in this instance it was very straight-forward.  The 3 drekkanas of the 8th house rule the left jaw, left lung and left calf; the drekkanas being the 3 parts of 10 degrees each within a zodiac sign.  Since Parashara doesn’t give attributions for the toes or feet and only gives the calves as the lowest body part of the leg it is reasonable to assume that the calves, feet and toes can all be seen from this drekkana.  Mars and Sun are both in the 3rd Drekkana of the 8th house from both the native’s ascendant and the ascendant of the transit time.  Mars indicates sudden or quick accidents or injuries and the Sun is karaka for the body while the 8th house as a whole is indicative of health issues.  All of this being aspected by Saturn the natural indicator of bones and the stage was set for a broken bone due to an accident.  Both Mars and the Sun are in the 3rd drekkana, being in the 20th-30th degrees of Taurus.  Parashara attributes this part of the 8th house to the left calve, which I believe can also apply to the foot and toes.  Thus the left toe was broken as a result of this transit.  As further evidence of this principle that the calves, feet and toes are all indicated by this drekkana I can compare my own chart.  When I was a teenager I suffered a major break in my left ankle.  I likewise have Rahu in the 20th-30th degrees of my 8th house, thus indicating injury to the left calf/foot/toes, and as soon as the Rahu antardasha began the injury occurred.